Britannia Fleet are proud to sponsor athlete “Super” Sam Maxwell and we will provide the latest updates on his journey.

Sam Maxwell had a tougher-than-expected night before claiming an eight-round decision over late substitute Ben Fields.  Maxwell had been due to face Akeem Ennis Brown for the British super-lightweight title, but Ennis Brown pulled out injured.

Fields was rough as anything, lunging forward with his head and getting a stern warning for throwing Maxwell to the floor in the opening round. When he got some space, Maxwell showed the difference in class, prodding home the jab and backing it up with short hooks and uppercuts.

The longer the fight went on, the more Maxwell was dominant, as he strung together some nice combinations and Fields, who was finally deducted a point for holding, had to dig in to last the distance. Williams scored it 79-73.

Sam was due to challenge for the British and Commonwealth super-lightweight titles in a clash of unbeaten fighters, against Akeem Ennis-Brown but the bout will now be unable to take place this week as he Ennis-Brown has been forced to pull out of the fight due to injury.

The event will be broadcast live on BT Sport, with Maxwell (14-0, 11 KOs) still getting the chance to compete after his planned fight with Akeem Ennis Brown was unable to take place.

It sees Maxwell make his return following his victory over Joe Hughes last August, where he successfully retained his WBO European super-lightweight title.

Former GB amateur star Maxwell has moved to new trainer Steve Maylett, a switch that he believes will pay dividends now and in the future.

From all at Britannia Fleet we support Sam Maxwell and can’t wait to see him continue his undefeated streak.

Also on the same show will be Edwards vs Essomba, Hutchison vs Blackledge and the headline fight, Dubois vs Snijders, setting the show to be a very entertaining evening for boxing fans all around the world.

Each of the fighters boast an impressive fighting record, with Sam being the bookmakers’ favourite due to his knockout prowess, however don’t rule out Joe as he has never been knocked out and his bouts have often been decided on points. Joe Hughes is a former EBU European Super Lightweight champion and Sam will have to be prepared for a battle if he is to retain his title.

Here at Britannia, we wish Sam all the best for the upcoming bout and look forward to celebrating with him afterwards. 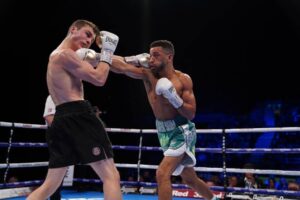 Utilising his advantages in power and strength Sam was composed throughout, landing an early left hook which set the tone and forced his opponent to rethink his strategy. It was a good blend of hard hitting, and the boxing abilities that Maxwell sometimes neglects, in a fight he was fully expected to win.

Rounds three, four and five proved exciting and was greeted with back and forth action with both fighters landing good, clean punches. Parker wanting to turn this bout into a toe to toe brawl, which very nearly materialised with Sam’s corner giving strong advice at the end of the fifth.

Parker was given some hope by landing a straight left hand in the seventh but this encouraged Maxwell to bring the fight to him which inevitably ended up being too much for the brave Parker to withstand. Looking tired and out of his depth, referee Howard Foster rightly jumped in to end matters with just fifteen seconds remaining in the round.

Following “Super” Sam’s dramatic win over Sabri Sediri, he is due to defend his title on 30th November 2019 against Connor Parker at Arena, Birmingham.

Each fighter has a professional record of 12-0, with the bookmakers making Sam the odds on favourite, due to his superior knockout prowess.

Speaking ahead of the fight, Sam says:

“There will be less drama this time,” insisted Maxwell when reminded of the final round footage that went viral and was seen by millions. “I have promised my missus and myself as well, but it is still going to be entertaining and I will go for the knockout and big shots.”

“I wouldn’t change a thing about it though because if I had gone in and just got the win I thought I was going to, I wouldn’t have got the exposure that I did and it was mad. My name is out there now and people know me.”

“Now it is Connor Parker, who is a good tidy boxer who has not lost a round, but on November 30 he is going to lose some rounds and get knocked out, definitely.”

“At this level everyone can box and move but not many have the power that can change a fight. I’ve got that from the first to last round and I am going to show that on fight night. Again.”

“They were fighting in a world title eliminator and are at near the pinnacle of my weight. It was a great fight, but one where I could see myself getting in with either of them and getting the win.”

“Getting past Connor Parker is my main goal at the moment and next year I will be in a position to fight Ritson and Davies and I am confident I can beat them.”

The bout is scheduled to start at 18:00 and will be broadcast live on BT Sports 2.

We can’t wait to see Sam defend his title and prove he deserves to be pushing for even bigger titles in the near future.

Good luck Sam from all of us at Britannia Fleet!

After being dropped twice in the first two rounds, for the first time in his professional career, Maxwell came back to win in emphatic style

On Saturday 23rd March 2019, Sam Maxwell faced Sabri Sediri (a last minute replacement for Kelvin Dotel) at Morningside Arena, Leicester. This was to be Super Sam’s debut televised bout and he certainly kept the crowd and the thousands watching on the television entertained.

The fight was scheduled for 10 rounds, with the winner holding the vacant WBO European Super Lightweight belt, a certain step up for both Maxwell and Sediri.

Maxwell started well and seemed to be in control of the bout in the first round, but Sediri’s unorthodox boxing style caught him unawares and meant he fell to the canvas for the first time in his professional career. Maxwell managed to compose himself and see out the first round, if a little shaken by the shock of being downed in the first round.

During the second round, Maxwell seemed to regain control and was putting Sediri under pressure, before being caught again with another surprise shot. The second time Maxwell has ever hit the canvas during his professional career and both coming within the first two rounds of the fight. Maxwell regained his feet and saw out the second round.

The rest of the fight saw Maxwell controlling the tempo and reverting to the basics of boxing, ensuring he doesn’t get caught with anymore unexpected shots. The judges scored each round in his favour from then on and he was due to win on points.

However, in true “Rocky” fashion, in the tenth round, Maxwell was caught with another dangerous shot and was wobbled. Sediri didn’t capitalise and proceeded to taunt and cajole him for the rest of the round, until 15 seconds was left on the clock and Super Sam connected with a quick 1-2, securing a dramatic and historic win by knockout.

See blow for the dramatic end to the fight:

These are the moments that boxing fans around the world love and Maxwell brought one of them during his televised debut, securing his first international belt in the process.

Here at Britannia Fleet we can’t be any prouder sponsors if we tried and were with Sam throughout the whole of the rollercoaster fight.

Congratulations Sam and we look forward to your next fight, onwards and upwards is the only way for such talent.

Moving Back to UK from Abroad

Moving Back to UK from Abroad

Moving Back to UK from Abroad: Everything You Need to Know   Are you planning to repatriate back to the UK after living abroad?  Recent government studies suggest that an... 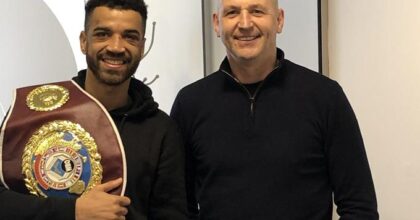 Britannia Fleet are proud to sponsor athlete “Super” Sam Maxwell and we will provide the latest updates on his journey.    29th March 2021 – Maxwell’s win sees him remain...

Here at Britannia Fleet Liverpool, we understand that although there seems to be light at the end of the tunnel, these are still very complicated times to be living through....